Around the World in Eighty Days (novel) 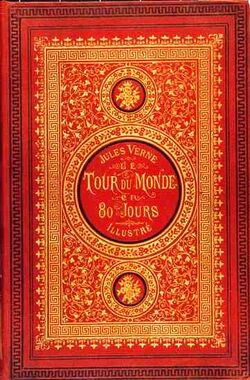 Around the World in Eighty Days is an influential adventure novel by French writer Jules Verne (1828-1905), originally published in 1872. On a bet, staid London businessman Phileas Fogg takes off on a fast-paced journey by rail, steamship, balloon and pachyderm, determined to circumnavigate the globe in a remarkable 11 weeks and 3 days. The stunt was considered at the time to be impossible in the allotted duration, so much so that in 1889, 25-year-old reporter Nellie Bly embarked on her own round-the-world excursion, hoping to break the record set by Verne's fictional protagonist 17 years earlier. (It took Miss Bly 72 days, 6 hours, 11 minutes to complete, each stage dutifully recorded in dispatches for the New York World newspaper.) The significance of Around the World in Eighty Days was demonstrated in the pervasive Victorian attitude that civilized man could do anything he set his mind to. A full century before Oscar Goldman proclaimed, "We have the technology" in the famous opening sequence for each episode of The Six-Million Dollar Man, imaginative writers and thinkers pushed the frontiers of science and medicine while declaring the same thing. Verne's book was later adapted into two (or more) films, the first, an Oscar-winning musical starring David Niven in 1956 and one with Jackie Chan and Steve Coogan in 2004. It was also adapted into a cartoon series entitled Around the World with Willy Fog in 1983.