Doctor Who, a successful British science-fiction series that has been running since 1963, explores concepts and stories spanning a range of worlds and eras both fictional and historical, through the medium of time-travel.  A number of stories, both televised and in spin-off media, carry a distinctly steampunk flavor. Associated motifs are particularly common Christmas specials and episodes set during the reign of queen Victoria.

Political and societal themes, including imperialism, are examined on an episode by episode basis. Given the show's age, it's possible that the program had some influence on the early development of steampunk. However, while characteristics of what we'd now associate with the genre always had a presence in the series, they weren't as noticeable as they are in the reboot continuation, or presented with the same awareness.

The doctor himself fits the archetype of a mad scientist, inventor, and Victorian styled adventurer rather well. Among other things, he has a talent for making impressive gadgets out of the available junk of practically whatever time period he finds himself (see "Hide"). The Doctor's incarnations also share a few character traits with Sherlock Holmes. Both are perpetually ahead of their time, while still embodying some air of an old fashioned gentleman. The Doctor has a Moriarty of his own in the form of The Master. Meanwhile Missy might be described as evil Mary Poppins.

The second Doctor traveled for a time with a Victorian companion named Victoria. In the audios, the 8th Doctor had a companion named Charley, born in the Edwardian era, who dreamed of becoming an adventurer. To that end she stowed away on an airship. All Victorian era episodes to starring the 11th doctor showcase the married pair of detectives/adventurers (hinted to be the inspiration for Sherlock Holmes and Watson), Jenny and Vastra. The latter is a lizard woman hailing from deep under the Earth's crust. The former is an action girl of a maid hiding a leather catsuit under her gorgeous period dress.

The Doctor's dress sensibilities usually have a distinctly old-timey, Edwardian, or even Victorian bent. The 8th Doctor is a particularly fitting example, sporting an intricate waistcoat as well as a cravat and pocket watch.

In the episode "The Vampires of Venice", the Doctor can be seen hanging from a swing and tinkering with the machinery of the Tardis's Underbelly while wearing goggles that wouldn't look out of place in a steampunk cosplay. As a rule, the 11th doctor was also fond of wearing a bowtie. He would would later trade his tweed jacket for a frock coat and begin wearing a waistcoat underneath, commonly carrying a pocket watch.

The Master in the episode "Utopia" kept a similarly Victorian appearance. This was accompanied by him carrying pocket watch that was also an essential plot piece (a chameleon arch in disguise). Prior to this, the Chameleon arch made it's first appearance, again as a pocket watch, In "Human Nature" and "Family of Blood". Both examples are inscribed with circular Gallifreyan (the common written language of the time lords), which is itself modeled on the inner components of a clock. The Master's Victorian fashion sense would eventually carry over to Missy.

The Tardis is a time machine disguised as a wooden police box. Despite it's unfathomably advanced capabilities, the Tardis might at anytime have a type writer, or one of those flip-clocks, grafted the console. The ship is the definition of an extravagant anachronism. The 11th doctor's Tardis interior incorporates a leather swing under the controls. The 10th's has a noticeably industrial and bronze look, with Gabby describing it as a "Steampunk Nightmare" in "The Weeping Angels of Mons". Both are strung with a healthy helping of hanging wires and cables.

Regardless, the most gothic of any Tardis unquestionably belongs to the 8th Doctor. The interior dripped with gothic architecture done in wood and stone, homey Victorian furniture, and books. The color scheme was largely rust browns and muted reds beneath all the blue atmospheric lighting. Charley once complained that his Tardis resembled something out of Jules Verne  more than what one would expect from a space ship. See Gallery.

Telescope from "Tooth and Claw".

11th doctor in front of Kazran's controls ("A Christmas Carol").

Cryogenic tank from "A Christmas Carol".

The cyber king from "The Next Doctor".

From "The Girl in the Fireplace" 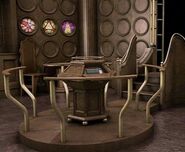 From "The Wedding of River Song"

Train through the Gherkin from "The Wedding of River Song"

From "Evil of the Daleks".

Space suit from "The Empress of Mars".