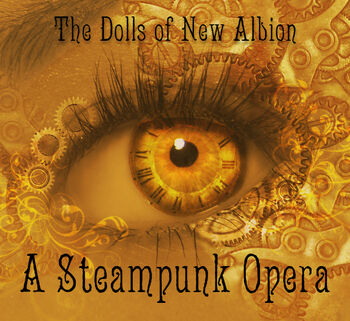 The Dolls of New Albion, A Steampunk Opera is a four act musical written by Paul Shapera which follows four generations of the McAlistair family in the fantastical city of New Albion. It is often abbreviated as DONA.

The musical features four singers. Traditionally, two of them switch roles every act, as the male and female characters change with each successive generation. The other two play the Narrator and a constant male character.

All four acts are narrated by a mysterious woman named Kate. The 1st Act is concerned with a scientist, Annabel McAlistair, and her attempt to bring back her dead love, placing him within the body of a mechanical mannequin. The 2nd Act shows her son, Edgar, his business exploits and how they affect the city. The 3rd Act follows his son, Byron, and his ensuing political race and cultural impact on New Albion. Finally, the 4th Act tells the story of Priscilla McAlistair and a New Albion Soldier. Throughout each acts there is Jasper, a continual presence in each of the character's lives.

Each generation's meddling with these Dolls contributes to the gradual fall of New Albion itself.

Kate the Narrator - An omnipotent guide

Jasper - A dead man, resurrected into a clockwork doll

Byron - Edgar’s son and acolyte of the Voodoopunk cult

Soldier 7285 - A recruit of the militarized New Albion police

Sam - A "brilliant mouse" referenced in the background multiple times in the opera.

Act 1 begins with The Narrator, Kate, telling a brief history of New Albion, a steampunked-victorian era town founded by a Gambler and a Monk who played a card game while a city was established around them. Fast forward to modern day and New Albion is filled with bustling streets and cafes, including a mafia run by a red-haired dwarf, zeppelin pilots, alchemists, and an aphrodisiac fog. However, the story is focusing around Annabel McAlistair (New Albion 1).

The story now begins with Annabel McAlistair, who is attempting to bring back the soul of her dead love Jasper, a boy whom she had fallen for back in college. However, she was kicked out of the college for stealing dead bodies and their connection was severed. Years later, Jasper dies and Annabel is saddened when she hears the news. While he has passed, her love for him hasn't. (Annabel Raises The Dead) After many desperate attempts, Annabel finally succeeds in resurrecting him and is happy with herself. While she is getting ready, the Narrator tries to get Annabel to listen to Jasper. He is pleading to Annabel through a radio song. She ignores him and leaves the home for the first time in a long while (Annabel Has A Doll). Annabel finally hears the song and realizes that Jasper doesn't wish to remain alive. Saddened now, she destroys Jasper (Annabel's Lament) and returns to her life of solitude, hiding her notes on bringing back the dead and ending Act I (We Bid The 1st Generation Adieu).

Act II starts up a generation later. New Albion has changed somewhat, containing many new characters. The red-haired dwarf has died and his son becomes the new mob leader. There are two girls, their pet albatross, Simon, and their mouse, Sam, who run crimes around the city. However, the story is still following the McAlistairs. Annabel finally married and had a son named Edgar, however, she died when he was ten. Edgar is grown up now and met a young woman named Fay, whom he wishes to wed. (New Albion 2)

The story continues with Edgar and Fay at a restaurant, having a romantic dinner. Yet, Fay dumps him, saying she has found someone else, and leaves him alone at the restaurant. Edgar is heartbroken again and returns home (Edgar Gets His Heart Broken). Back at home he finds himself rummaging through an old trunk in his attic. Kate watches as he finds many family relics, and finally stumbles upon his mother's notes on resurrecting the dead (The Old Trunk in the Attic). The next morning, Edgar tries out and succeeds with the experiments that are detailed within the notebooks. He proceeds to create a business out of bringing back people's loved ones as mechanical dolls. After several weeks, possibly months, Edgar is at the top of his empire and basically runs New Albion. He orders that the man Silof, who stole Fay from him, be destroyed. Kate tries to knock some sense into him, however he is obsessed now with revenge and ignores her (Edgar Builds A Business). Fay comes to him and Edgar reveals his master plan. He has brought back Fay's father and in order to see him, she must marry him. Fay reflects on her life with Edgar, and is torn with hatred for him but love for her dead father, so she chooses the latter and marries Edgar, ending Act 2 (Fay Considers Edgar's Proposal).

Act III once again takes place another generation later. New Albion has changed drastically though. The town is filled with faceless dolls who broadcast only radio, and their families project personalities onto them. They fill up the slums, streets, and homes. The doll that Edgar claims is Fay's father is of course Jasper. Together, despite their loveless marriage, they produce a child, a son named Byron. Byron has fallen in love with Jasper, and now is part of a underground subculture know as Voodoopunk (New Albion 3).

The act begins with Byron singing with the other voodoopunks  while asking for Jasper to speak with him, similar to his grandmothers pleas. Amelia, Byron's best friend, is in love with him and wants him to notice her, however his attention is all on Jasper. Byron also attempts to rile the crowds of New Albion and convince the people to vote Jasper as mayor (The Movement 1). The Voodoopunks host a ceremony or ritual and enact possession and call upon the Sidhe (Voodoopunk). Amelia continues to seek Byron's love, however is unable to receive it. Byron attempt to convince the people of New Albion to vote for Jasper again, and explain why he's the best choice (The Movement 2). Now in front of the crowds, Jasper is able to finally communicate about how he feels and sings a song for everyone about his despair and pain (Elysian Night). All of the Dolls in the city relate heavily to Jasper's song, as they don't want to be living motionless puppets. Following the song, every doll begins to play it, and soon Amelia, who is abused by her father, feels a deep compassion about the song and commits suicide (The Suicide). The next day, her suicide note is found with only the lyrics to Jasper's song on it. All of New Albion begins to fear that the dolls will kill them and they begin to rile up. It's Byron who finally fans the flames unknowingly and causes the riots to begin. Byron runs to find Jasper, his love, and risks his life to pull him from the bonfire, ending Act III (The Bonfire of the Dolls).

Act IV starts up now, this time with a flashback to early New Albion. Kate tells the story of how several hundreds of years before, a Monk and a Gambler embarked on a long journey to the North. After a heated debate about God, chance, and fate, they decided that the only way to settle it was through a card game. However the game seem to be endless and right before the Gambler won, his heart gave out and he died. He swore that somehow he and the Monk would be back and their game wasn't done (The Ballad of The Gambler and The Monk).

Returning us to modern day, New Albion is now a cold and heartless martial place. Byron married a beard and had a daughter named Priscilla. Similar to Edgar, Priscilla loses her parents; Byron to the police and her mother to the mental hospital. In order to maintain peace across New Albion, armored cops patrol, searching for Dolls with execution as the punishment. Soldier 7285 is a new soldier recently added to the armored police patrols. Jasper is still around and now is hiding with Priscilla deep within the family house, residing their days playing a never-ending card game (New Albion 4).

While Priscilla and Jasper play cards, Jasper mourns about his existence. He claims that he is only ok with it currently because he loves Priscilla like his daughter Fay. Priscilla grows angry that Jasper would wish to die and leave her behind in the cruel world in which they live in. During this, Soldier 7285 patrols the city in search of Dolls (Priscilla and Jasper Play Cards). Priscilla reaches a break in their game and proceeds to contemplate about the situation in which they are in. She finally realizes that some must sacrifice for love and calls the police and confesses to her crime of harboring a Doll (Prisiclla Contemplates). Jasper hears this and pleads with her to run and live her life, however, she wishes to stay with him. Soldier 7285 and his squad arrive at the home and burst in, arrest them and sentence them to death. Priscilla tells Jasper that she will be with him once more in the afterlife and dies protecting him, causing Soldier 7285 to not fire. However the rest of the squad fires and kills them (The Day They Come). Soldier 7285 is given a court martial for negligence of duty. He is inspired by Priscilla that she would give her life for a person that she loves, and he swears that he'll bring down the martial law of New Albion (I Will Bring You Down).

The Narrator then talks about the revolution that is to rise, but that is a story for another time. Kate ends the opera and the history tale  (We Bid You All Adieu).

The ensuing revolution is detailed in the Dieselpunk opera, The New Albion Radio Hour.

The London Ovalhouse premiered the Dolls of New Albion. Annabel, Fay, Amelia, and Priscilla are performed by Lauren Osborn; Edgar, Byron, and Soldier 7285 are performed by Oliver Marsh; Jasper is sung by Mike Shearer; and Kate, otherwise known as the Narrator, who is consistent throughout the four acts, is performed by Kate Young. The show was commissioned and produced by Nadia Adame and Mark Swetz of Compañía Y, and Mark Swetz directed. Production design was by Lily Arnold. Piano accompaniment is played by Paul Shapera himself. The show can be watched here or here.

The Clockwork Hart was the next group to produce Dolls of New Albion. The narrator was sung by Alice Young, who was also the producer. Annabel was played by Zoe McGee, who was also the Director and Choreographer. Jasper was played by Jack Taylor. Fay was sung by Mary Chapman. Edgar was voiced by Tim Ledsam. Amelia was Emma Fleming. Byron was Connor Warden. Soldier 7285 was Sam Hall. The various Dolls were played by Efi Gauthier, Camille Jetzer, and Filip Ferdinand Falk Hartelius. It can be watched here.

The Bayreuth production is the latest production. The Narrator is Maja Lösel. Annabelle, Fay, and Amelia are played by Amelie Rehorz. Jasper was played by Tobias Vogt and Marissa Hofmann. Edgar and Byron are played by Klaus Harfmann. Voodoopunks were played by Peter Collin, René Eisenblätter, Gina Weschenfelder. Priscilla was portrayed by Maike Göbel. And Soldier 7285 was voiced by Sven Bagger. The show can be watched here. 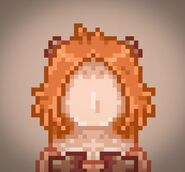 Add a photo to this gallery
Retrieved from "https://steampunk.fandom.com/wiki/Dolls_of_New_Albion,_A_Steampunk_Opera?oldid=12810"
Community content is available under CC-BY-SA unless otherwise noted.