Five Weeks in a Balloon (novel) 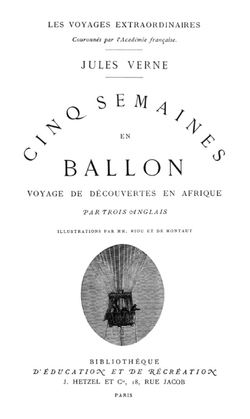 Five Weeks in a Balloon, or, Journeys and Discoveries in Africa by Three Englishmen (French: Cinq semaines en ballon) is an adventure novel published by Jules Verne in his native French during 1863, it was translated into English during 1869. Public interest in fanciful tales of African exploration was at its height, and the book was an instant hit; it made Verne financially independent and got him a contract with Jules Hetzel's publishing house, which put out several dozen more works of his for over forty years afterward.

The foreword of an early translation reads as follows:

"Five Weeks in a Balloon" is, in a measure, a satire on modern books of African travel. So far as the geography, the inhabitants, the animals, and the features of the countries the travelers pass over are described, it is entirely accurate. It gives, in some particulars, a survey of nearly the whole field of African discovery, and in this way will often serve to refresh the memory of the reader. The mode of locomotion is, of course, purely imaginary, and the incidents and adventures fictitious. The latter are abundantly amusing, and, in view of the wonderful "travelers' tales" with which we have been entertained by African explorers, they can scarcely be considered extravagant; while the ingenuity and invention of the author will be sure to excite the surprise and the admiration of the reader, who will find M. VERNE as much at home in voyaging through the air as in journeying "Twenty Thousand Leagues under the Seas.

This foreword was written by one William Lackland who, it must be believed, is a British nommé de plumé. The translator's real name is yet to be identified.

A scholar and explorer, Dr. Samuel Fergusson, accompanied by his manservant Joe and his friend professional hunter Richard "Dick" Kennedy, sets out to travel across the African continent — still not fully explored — with the help of a balloon filled with hydrogen. He has invented a mechanism that, by eliminating the need to release gas or throw ballast overboard to control his altitude, allows very long trips to be taken. This voyage is meant to link together the voyages of Sir Richard Burton and John Hanning Speke in East Africa with those of Heinrich Barth in the regions of the Sahara and Chad. The trip begins in Zanzibar on the east coast, and passes across Lake Victoria, Lake Chad, Agadez, Timbuktu, Djenné and Ségou to St Louis in modern day Senegal on the west coast. The book describes the unknown interior of Africa near modern day Central African Republic as a desert, when it is actually savanna.

A good deal of the initial exploration is to focus on the finding of the source of the Nile, while the second leg of the journey is to link up the other explorers. There are numerous scenes of adventure, composed of either a conflict with a native or a conflict with the environment. In all their adventures, the protagonists overcome by continued perseverance more than anything else. The novel is filled with coincidental moments where trouble is avoided because wind catches up at just the right time, or the characters look in just the right direction. There are frequent references to a higher power watching out for them.

The balloon itself ultimately fails before the end, but makes it far enough across to get the protagonists to friendly lands, and eventually back to England, therefore succeeding in the expedition. The story abruptly ends after the African trip, with only a brief synopsis of what follows.

Most of Verne's works are available here on Project Gutenburg.

There is also an article in the Wikipedia on the novel, Five Weeks in a Balloon, here.