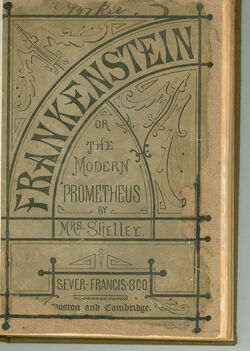 Frankenstein, or The New Prometheus, is a novel written in 1817 by Mary W. Shelley. Victor Frankenstein, a young student of "natural philosophy," imbues life to a creature composed of corpses from churchyards and dissecting rooms. At the moment of his success, he rejects his creation and runs from it in terror, thereby setting in motion a series of tragic circumstances that unfold in the rest of the book. The tale relates how the creature longs for sympathy, but is shunned by everyone he encounters and in response becomes bent on evil, and later, the instrument of retribution on the man who made him.

Mary Shelley had not given a name to the monster in her book, but popular imagination quickly resorted to calling both creature and creator "Frankenstein."

Soon after the book's publication, it was turned into a melodrama that played up the exciting elements of the story as well as driving home the moral lesson that he who defies nature is punished. With the character of Victor Frankenstein, the romantic seeker of knowledge, is inaugurated the enduring tradition of the "mad scientist." It was first brought to the silent screen in 1910 by Thomas Edison's film company, but the most famous version is that produced by Universal Pictures in 1931, featuring an unknown 44-year-old actor named Boris Karloff.