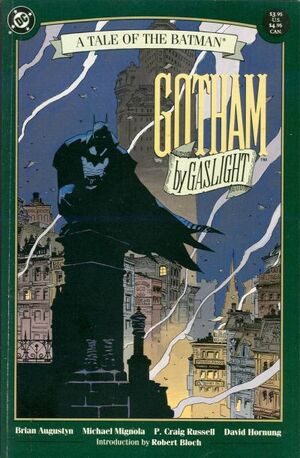 Gotham by Gaslight is a graphic novel published by DC Comics in 1990. This is part of DC's Elseworlds line, featuring an alternate universe in which Batman lived in the Victorian era.

It is 1889. Bruce Wayne is on a tour of Europe. His trip to Europe ends in Vienna, where he has come to learn from Dr. Freud. Bruce tells Freud that he has a recurring dream in which he recalls the murder of his parents and decides he must return to Gotham City. On the return trip, Bruce meets Jacob Packer, an old family friend who he calls Uncle Jake, who also returned from a trip to Europe.

Shortly after arriving, the Inspector Gordon informed about criminal gangs currently operating in Gotham. Gordon also shows Bruce the case of a man who poisoned his wife and tried to commit suicide with the poison, which left him alive with a permanent grin. Bruce takes up the mantle of Batman to fight criminals on the street.

At the same time, a series of murders of women take place and some people begin to suspect that Batman is the murderer. But soon is discovered that Jack the Ripper has come to Gotham, as the murders in Gotham City seem to resemble the Ripper murders.

After a search at Wayne Manor, a bloody knife is found under Bruce's bed and Bruce is arrested. A trial is held in which Uncle Jake is Bruce's defense attorney. After the trial, Bruce is convicted of being the Ripper and sentenced to be hanged for his crimes. Bruce is imprisoned awaiting execution in Arkham Asylum.

Once in prison, Gordon gives to Bruce all the documentation on the crimes and Bruce toils day and night to try to figure out how he can get the Ripper. Just one day before the execution, Bruce learns the identity of the Ripper by discovering he had the skill of a surgeon and used a knife that belonged to the medical group who worked with his father. Finally Bruce escapes from prison with the help of Alfred and heads straight for the Ripper.

Batman interrupts just as the Ripper is about to claim his next victim. Batman chases the Ripper throughout Gotham and the two eventually come to a stop at the grave of Thomas and Martha Wayne, where it is revealed that Jacob Packer is the Ripper. Packer had been trained in medicine and law with the money of Thomas Wayne, but he was driven insane by Martha Wayne's rejection of his advances. Since then he was killing women who resemble Martha to silence the laughter of Martha he heard in his head.

In addition, Packer reveals that he hired an assassin to kill the Waynes. Bruce Wayne discovers his identity. Gordon appears at this time with the police and Batman tells them to arrest Packer. Packer confesses that he is the Ripper and tries to kill Batman, but Gordon shoots Packer dead at the last minute. Batman disappears into the shadows, leaving Gordon to take in the body of Jack the Ripper.

In 2018, Warner Bros. produced Gotham by Gaslight, a animated movie that is loosely based on this issue. In the movie, the identity of Jack the Ripper is Commissioner Gordon; there are appearances of other Bat-characters, such as Poison Ivy, Hugo Strange, Dick Grayson, Jason Todd and Tim Drake.