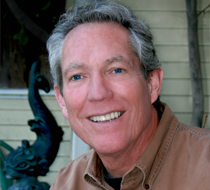 James Blaylock born September 20, 1950, he atteneded the California State University, Fullerton with Tim Powers and K. W. Jeter, making up the three "original" steampunks according to Jeter. Blaylock is known for his humorous writing style. He has written seven free standing works in the steampunk genre along with an anthology of short stories and novellas.

Blaylock is considered to be a fabulist. Rather than choosing a setting in a different world or realm, his fantasies are set right here on Earth, often in Orange County California. He has many works that are not part of the Steampunk genre.