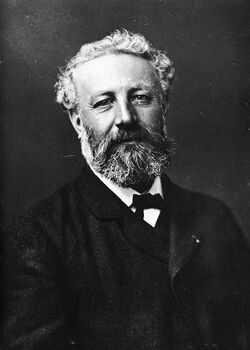 Jules Verne (February 8, 1828 – March 24, 1905) was a prolific French author with more than 60 novels (or Voyages Extraordinaire) to his credit, many with plots considered to be among the earliest examples of steampunk. Just as he wrote science fiction before the term existed, so too did Verne write proto-steampunk more than a century before the term existed.

Verne wrote at a time when there was unprecedented public enthusiasm for science, engineering and exploration. Technical advances such as the steam locomotive, the telegraph, and electrical power proved to citizens of the late nineteenth century that they lived in an age of wondrous progress and exploration. Verne was not a scientist or an engineer (his training had been in law), but he was fascinated by technology and this is reflected in such novels as Journey to the Center of the Earth (1863), From the Earth to the Moon (1864), Twenty Thousand Leagues Under the Sea (1869), A Floating City (1870), Around the World in Eighty Days (1872) and The Mysterious Island (1874-75).

While Verne may have placed his characters into implausible situations, his technology was grounded in fact. Readers not fluent in French are missing out on a great deal of what Verne actually wrote, for early English translations were often slapdash affairs, concentrating on the sensational elements of the story and omitting much of the painstaking, scientific detail. Because these older translations are now public domain (and therefore cheap to publish) they unfortunately remain the standard versions to this day!

An impressively complete bibliography of Jules Verne's works (in French and with original publication dates) may be found at The Complete Jules Verne Bibliography website.