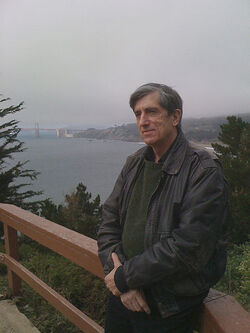 K. W. Jeter, born in 1950 has written stories set in the Star Trek as well as the Star Wars literary universes. He has also written three sequels to the movie Bladerunner, which is itself based on Philip K. Dick's novel entitled Do Androids Dream of Electric Sheep?. He became friends with James Blaylock and Tim Powers while attending California State Univerisity at Fullerton. Through them he met, and subsequently became friends with, Philip K. Dick.

Jeter has also written in the cyberpunk genre, most notably a novel entitled Dr. Adder. His first Steampunk novel, Morlock Night published in 1979, involves the characters and situations of the H. G. Wells novel The Time Machine, in which the Morlocks take Wells's time machine back to King Authur's time with the intentions of wreaking havoc on England. Jeters' other novel in the steampunk genre is Infernal Devices, which was published in 1987.

Jeter also has a number of other works to his credit, mostly outside the steampunk genre and written inside universes created by others.