Laputa: Castle in the Sky

Laputa: Castle in the Sky (天空の城ラピュタ, Tenkū no Shiro Rapyuta; also known as simply Laputa and re-titled Castle in the Sky for release in the United States) is a 1986 anime film written and directed by Hayao Miyazaki.

Young miner Pazu and mysterious girl Sheeta (who wears a magic pendant around her neck) team up to find the long-lost island of Laputa, which is rumored to have great riches and gems. Accompanied by a band of bumbling air pirates led by the quick-tempered Ma Dola, Pazu and Sheeta are pursued by government agents who want the riches of Laputa for themselves.

The film is set in an alternate history, with the story taking place somewhere between 1868 and 1900. The society seems is very industrial. Pazu lives in a mining town, and much of the architecture is rooted in this mining motif. Blatant steampunk elements include huge and intricate airships, smaller flying contraptions, and sky pirates. There's a massive flying city and there are ancient Robots. Prevalent themes focus on technological progress and the environment, with emphasis on exploring the fear of humans losing touch with nature. 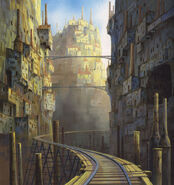