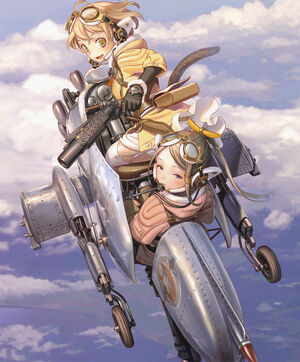 Last Exile (ラストエグザイル, Rasuto Eguzairu) is a Japanese animated television series created by Gonzo. It featured a production team led by director Koichi Chigira, character designer Range Murata, and production designer Mahiro Maeda. The three had previously worked together in Blue Submarine No. 6, one of the first CG anime series. Last Exile premiered on TV Tokyo on April 7, 2003 and ran for twenty-six episodes until its conclusion on September 29, 2003.

The story is set on the fictional world of Prester, where its inhabitants use aerial vehicles known as vanships as a means of transportation. On this world which is divided in eternal conflict between the nations of Anatoray and Disith, sky couriers Claus Valca and Lavie Head must deliver a girl who holds the key to uniting the two factions. Although Prester itself is not a representation of Earth, it features technology reminiscent of nineteenth century Europe at the dawn of the Industrial Revolution. Many of its designs were also inspired by Germany's technological advances during the interwar period.

Prester's two nations of Anatoray and Disith are separated by a turbulent region of the sky known as the Grand Stream and are engaged in eternal conflict according to the code of chivalric warfare. A superior faction known as the Guild enforces these rules. It also provides the two nations with technology but, unknown to them, has dishonorable intentions, to preserve the status quo and enforce its dominance of both sides. Although the story is set in the future, the technology employed differs from that in a typical space opera. Instead, the show's retro-futuristic setting resembles nineteenth century Europe at the height of the Industrial Revolution. Inhabitants of Prester operate aerial vehicles known as vanships in the world's Golden Age of Aviation.

Various scenes in the series also show existing tension between the upper and lower classes. Anatoray's nobility and military officers generally believe that commoners do not understand their codes of chivalry. On the other hand, the lower class also despise the aristocracy for their monopoly on resources. This tension extends to the accessibility of clean water, which varies in price according to purity grades. In the larger story, the advanced Guild society is portrayed as degenerate and lazy, while the people of Anatoray and Disith are creative and industrious.

The series introduces viewers to a wide range of naval and military vocabulary. More primitive navigational methods such as dead reckoning and instruments such as the sextant are also used in the series.