"Surely the Germans and their Austrian chums weren't so daft as to start a war just because some aristocrat had been assassinated. The Clankers were like Newkirk's mum. They were afraid of fabricated species and worshipped their mechanical engines. Did they think their mob of walking contraptions and buzzing aeroplanes could stand against the Darwinist might of Russia, France, and Britain?" - Leviathan by Scott Westerfeld

Leviathan is a young adult novel trilogy by Scott Westerfeld. The first book, also called Leviathan, was published in 2009. Each instalment, including the companion guide, contains illustrations by Keith Thompson.

The trilogy is an alternate history set during World War I. The German Central Powers are "Clankers" that use steampunk machinery, and the British Entente Powers are "Darwinists" that genetically engineer animals to suit their needs.

The story focuses on––and switches between the points of views of––two protagonists: Prince Aleksander, the heir to the throne of Austria-Hungary until he is required to escape danger in his homeland; Deryn Sharp, a teenage girl disguising herself as a boy so she can work in the British Air Service. Together, they dodge danger and discovery, encounter various Clanker and Darwinist inventions, and seek to bring an end to the war.

This book series features and focuses on many steampunk inventions that are used by the Clankers in the war and in everyday life. Such inventions include walking war machines (both big and small) and airships.

The Darwinists also have some steampunk-inspired animal creations, such as a whale-airship hybrid and a jellyfish-air-balloon hybrid.

Despite the fact that the story is set during World War I, the fashion is mainly Victorian, as seen with women's outfits in illustrations. 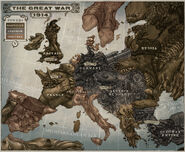