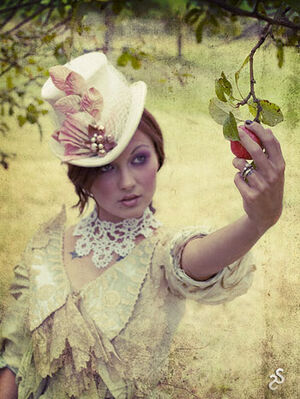 "The goal is to marry the sensibilities of Emily Bronte to the all-out rebellious attitude of a time-traveling Johnny Rotten."

Steampunk fashion, at its heart, is based on the Victorian style aesthetic, but embellished and influenced by steampunk fiction. While some wear steampunk-influenced outfits in everyday circumstances, true steampunk attire is often reserved for special occasions, such as steampunk, anime, or cosplay conventions.

Steampunk costumes are traditionally handmade or bought from a thrift store, but it is not uncommon to see a steampunk wearing mass-produced clothing, usually from websites that specialize in steampunk fashion. Colors also tend to be subdued and are rarely bright in color. Colors are commonly neutral, although red and blue can sometimes be found. Outfits are often tied together by at least one prominent accessory, such as goggles, parasols, top hats, or some kind of mechanical gadget.[1]

Steampunk women often (but not always) wear dresses complete with petticoats, corsets, and some sort of headwear, often a small, feminine top hat or a floral pin. It is not uncommon, however, to see a steampunk lady dressed as a pilot, air pirate, or engineer; steampunk is a genre of adventure and women are often eagerly welcomed to join the fun.

Explorers, Aviators, and Air Pirates can expect to dress for their elements.  Explorers on the ground may dress in billowy clothing, pantaloons, high waters and possibly an outback hat, crush cap, or pith helmet.  An aviator may dress in military aviation or bomber jackets, and other tight fitting leather accouterments.  Air Pirates may do all of the above, but dash in feathers, the look of the aesthetic, and color.

A Steampunk pocket watch is a common accessory for steampunks of either gender. In a world where wristwatches do not exist, time can be kept fashionably in the pocket of a waistcoat. (See also: "Steampunk Style Jewelry").

However, due to the rapid advance of technology during the steampunk era, traditional wrist watches still make the list of the best steampunk watches in steampunk fashion. These watches often have exposed gears and other aspects of steampunk technology showing prominently.

Headwear is an important part of steampunk fashion. A steampunk may often don a top hat, a leather flight helmet, a bowler hat, a straw boater/skimmer, an Arctic flap hat, a pith helmet, a deerstalker hat (in inspiration of Sherlock Holmes), a pirate-style bandana, or a newsboy cap. These were common during the Victorian era and were often considered stylish. However, headwear is not limited to Victorian styles. Hair may be adorned with braids, feathers, beads, wire, yarn, dreadlocks and other punk-like elements to juxtapose elegant Victorian clothing.

Goggles are often considered to be a vital part of any steampunk costume. Even the most elegant of steampunk outfits can obtain the grungy, punk feel of the subculture with the inclusion of goggles. Goggles are used for a variety of things in steampunk fiction: protection during time travel or from sparks while inventing, from flying bugs while piloting airships, or even to enhance eyesight. Goggles in steampunk fashion are often modded to included extra lenses and brass fittings.

Lolita is a Japanese fashion style that came into being in the 1980s. Because the idea behind Lolita is also inspired by Victorian England, Lolita can be considered the cousin to steampunk fashion, albeit a more girly, modest one. There are subsets of Lolita fashion, including Classic Lolita, Gothic Lolita, Punk Lolita, and even a Steampunk Lolita. The Lolita fashion, however, is much more focused on purchasing clothing from commercial vendors rather than following the steampunk tradition of thrift stores and found objects. ("Steampunk Style Jewelry")

The typical Lolita silhouette consists of a knee-length skirt worn with petticoat to create a bell-shape combined with a tighter bodice that covers the shoulders and usually shows no cleavage. There are some rather strict rules or guidelines to identify an outfit as Lolita within the Lolita community.

Because the term "Lolita" brings to mind the Vladimir Nabokov novel of the same name, the fashion is sometimes mistaken by Westerners for fetishism. On the contrary, Lolita fashion is childish, girly, and seen as a rejection of sexualized clothing and the meaning of the term was most likely lost to the Japanese in translation.