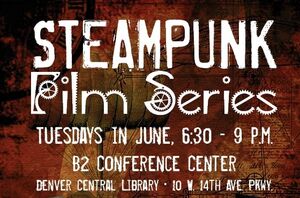 The production of steampunk films seems to have started as early as 1902 with A Trip to the Moon. Since then, many steampunk movies have been made. Steampunk films are known for being highly visual, with clever gadgetry often playing a role. Steampunk plots are often that of a magical journey with a sci-fi slant and heroes can be described as "quixotic". Costuming is often lavish, steeped in Victorian styles and gadgetry.

Although steampunk first appeared in 1902, Metropolis is considered to be one of the first true steampunk films, although Disney's 20,000 Leagues Under the Sea is often considered responsible for creating steampunk's retrofuturistic and Victorian stylings.

Recently, steampunk films have risen in popularity, nearly exploding in numbers in theaters.