The Chase of the Golden Meteor 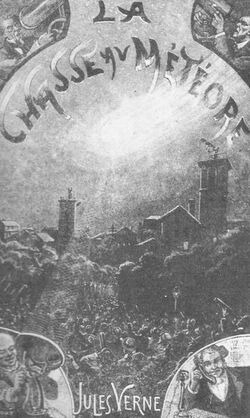 The Chase of the Golden Meteor (French: La Chasse au météore) is a novel by Jules Verne. It was one of the last novels written by the prolific French hard science fiction pioneer and was only published in 1908, three years after his death. It is one of seven such posthumous novels, many of which were extensively edited by his son. Verne himself first wrote "La Chasse au météore" in 1901 and then rewrote it before his death. Michel Verne is known to have emphasized the romantic sub plot of this novel and expanded it from 17 to 21 chapters, among other changes.

The novel concerns the rivalry between 2 amateur astronomers in the same American town who spot a new meteor and attempt to claim the credit of the discovery for themselves. The meteor turns out to be extremely valuable, made from solid gold. An eccentric scientist, this time an inventor, creates a device which will direct the meteor's course to a specific location. This character was an invention of Michel, rather than Jules, Verne.

The book is seen as a social satire lampooning greed, monomania, and vanity.

The future world depicted in the book includes 2 political predictions which failed to come true: first, the United States comes to be composed of 51 states and accordingly, its flag has 51 stars, as opposed to the 45 states that existed in 1905 when Verne died; secondly, Greenland becomes an independent and sovereign nation state.

In November, 1908 Grant Richards (London) published the first English translation as The Chase of the Golden Meteor from the version of Michel Verne, in a fully illustrated edition.

In 1965 I.O. Evans published a condensed version in the Fitzroy Edition as The Hunt for the Meteor.

In 1986 the Société Jules Verne published the original French version.

In 1998 Bison Books, University of Nebraska Press, republished The Chase of the Golden Meteor in a fully illustrated replica version of the Grant Richards version with an introduction by Gregory A. Benford.

In 2006 The Meteor Hunt was published by Bison Books, University of Nebraska Press translated by F. P. Walter and Walter James Miller from the original text by Jules Verne.