The First Men in the Moon (novel) 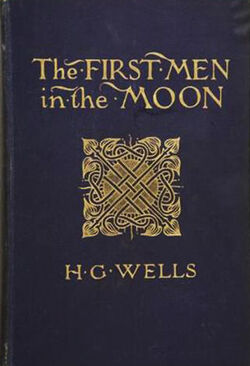 The First Men in the Moon is a scientific romance published in 1901 by the English author H. G. Wells, who called it one of his "fantastic stories".[1] The novel tells the story of a journey to the moon undertaken by the two protagonists, a businessman narrator, Mr. Bedford, and an eccentric scientist, Mr. Cavor. Bedford and Cavor discover that the moon is inhabited by a sophisticated extraterrestrial civilization of insect-like creatures they call "Selenites".

The narrator is a London businessman who withdraws to the countryside to write a novel by which he hopes to alleviate his financial problems. Bedford rents a small countryside house in Lympne, in Kent, where he wants to work in peace. He is bothered every afternoon, however, at precisely the same time, by a passer-by making odd noises. After two weeks Bedford accosts the man, who proves to be a reclusive physicist named Mr. Cavor. Bedford befriends Cavor when he learns he is developing a new material, cavorite, that can negate the force of gravity.

When a sheet of cavorite is prematurely produced, it makes the air above it weightless and shoots off into space. Bedford sees in the commercial production of cavorite a possible source of "wealth enough to work any sort of social revolution we fancied; we might own and order the whole world".[2] Cavor hits upon the idea of a spherical spaceship made of "steel, lined with glass", and with sliding "windows or blinds" made of cavorite by which it can be steered, and persuades a reluctant Bedford to undertake a voyage to the moon; Cavor is certain there is no life there.[3]

On the way to the moon, they experience weightlessness, which Bedford finds "exceedingly restful".[4] On the surface of the moon the two men discover a desolate landscape, but as the sun rises, the thin, frozen atmosphere vaporizes and strange plants begin to grow with extraordinary rapidity. Bedford and Cavor leave the capsule, but in romping about get lost in the rapidly growing jungle. They hear for the first time a mysterious booming coming from beneath their feet. They encounter "great beasts", "monsters of mere fatness", that they dub "mooncalves", and five-foot-high "Selenites" tending them. At first they hide and crawl about, but growing hungry partake of some "monstrous coralline growths" of fungus that inebriate them. They wander drunkenly until they encounter a party of six extraterrestrials, who capture them.[5] The insectoid lunar natives (referred to as "Selenites", after Selene, the moon goddess) are part of a complex and technologically sophisticated society that lives underground, but this is revealed only in radio communications received from Cavor after Bedford's return to earth.

Bedford and Cavor break out of captivity beneath the surface of the moon and flee, killing several Selenites. In their flight they discover that gold is common on the moon. In their attempt to find their way back to the surface and to their sphere, they come upon some Selenites carving up mooncalves but fight their way past. Back on the surface, they split up to search for their spaceship. Bedford finds it but returns to Earth without Cavor, who injured himself in a fall and was recaptured by the Selenites, as Bedford learns from a hastily scribbled note he left behind.

Chapter 19, "Mr. Bedford in Infinite Space", plays no role in the plot but is a remarkable set piece in which the narrator describes experiencing a quasi-mystical "pervading doubt of my own identity. . . the doubts within me could still argue: 'It is not you that is reading, it is Bedford—but you are not Bedford, you know. That's just where the mistake comes in.' 'Counfound it!' I cried, 'and if I am not Bedford, what am I? But in that direction no light was forthcoming, though the strangest fancies came drifting into my brain, queer remote suspicions like shadow seem from far away... Do you know I had an idea that really I was something quite outside not only the world, but all worlds, and out of space and time, and that this poor Bedford was just a peephole through which I looked at life..."[6]

By good fortune, the narrator lands in the sea off the coast of Britain, near the seaside town of Littlestone, not far from his point of departure. His fortune is made by some gold he brings back, but he loses the sphere when a curious boy named Tommy Simmons climbs into the unattended sphere and shoots off into space. Bedford writes and publishes his story in The Strand Magazine, then learns that "Mr. Julius Wendigee, a Dutch electrician, who has been experimenting with certain apparatus akin to the apparatus used by Nikola Tesla in America", has picked up fragments of radio communications from Cavor sent from inside the moon. During a period of relative freedom Cavor has taught two Selenites English and learned much about lunar society.

Cavor's account explains that Selenites exist in thousands of forms and find fulfillment in carrying out the specific social function for which they have been brought up: specialization is the essence of Selenite society. "With knowledge the Selenites grew and changed; mankind stored their knowledge about them and remained brutes—equipped," remarks the Grand Lunar, when he finally meets Cavor and hears about life on Earth.[7] Unfortunately, Cavor reveals humanity's propensity for war; the lunar leader and those listening to the interview are "stricken with amazement". Bedford infers that is for this reason that Cavor is prevented from further broadcasting to Earth. Cavor's transmissions are cut off as he is trying to describe how to make cavorite. His final fate is unknown, but Bedford is sure that "we shall never…receive another message from the moon".[8]

The First Men in the Moon has been adapted to film four times: